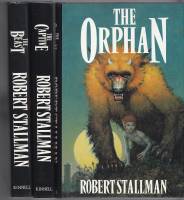 ''author of the Beast trilogy, the last two books of which were published posthumously: The books are complex, sensitively written fabulations, fitting between the generic borders of sf and horror, and update the myth of the werewolf with the sf premise that they are a chrysalis form of alien life; when two mate they will trigger a new phase in their life-cycle. The books do not, however, feel very sf-like, and they most come to life in the opposing tugs between the first beast's life as beast and as human, both phases desiring autonomy. The awkwardly structured last book of this engrossing series probably needed an auctorial revision which it could not be given'' (Peter Nicholls/Encyclopedia of SF).

Title: The Orphan (and) The Captive (and) The Beast.