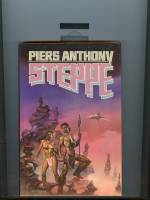 SF novel: ''thrust naked and helpless at the moment of his death into a world he thinks is hell, a Turkish warrior chieftain discovers that this world, which is a strange recreation of his own, is inhabited by a race of humans known as Galactics''. Originally published in the UK by Millington in hardcover way back in 1976.

''(both these series) use action scenarios with thinly drawn backgrounds and linear plots not comfortably capable of sustaining the weight of significance the author requires of them. Perhaps the most successful of such books is STEPPE (1976 UK), a singleton featuring Alp, whose single-minded career playing Genghis Khan in a future dominated by a galaxy-spanning computer-operated game is refreshingly unadulterated with any attempts at significance'' (John Clute/Encyclopedia of SF).