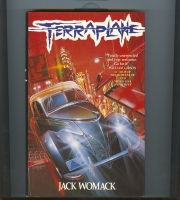 SF novel, the author's second book, sequel to AMBIENT (1987) and second in the Ambient/

''US writer whose first five novels are stylish and potent exercises in a post-cyberpunk urban idiom, and comprise the first instalments in a loose ongoing series about the near-future state of the USA. The sequence, reminiscent at points of the baroque New York detective fictions of Jerry Oster, consists of Ambient (1987), set in the complexly desolated warzone which New York has become in the early 21st century, evokes comparisons with James Joyce and Anthony Burgess in its sensuous, choked, eloquent, linguistically foregrounded presentation of the victims of a radioactive accident who populate the fringes of the fragmented city, and who so hypnotically manifest the Goyaesque horrors of the scene that volunteer ''normals'' mutilate themselves and join the ranks of the sinking. In the story itself, however, the author exhibits a certain lack of plotting imagination, and neither tycoon Thatcher Dryden nor the megacorporation, Dryco, which he runs nearly singlehanded are particularly convincing when set against the mise en scene. Out of that venue, the protagonists of TERRAPLANE (1988) hurtle pastwards into an alternate world version of late-1930s New York, an apartheid-ridden Dystopia -- the oppressed lives of Black Americans are described with haunting intimacy -- whose vileness may, or may not, be seen as worse than the radiation-corrupted, corporation-dominated nightmarishness of our own new era. Somewhat less scourgingly, Heathern (1990 UK) returns to New York and to Thatcher Dryden, who on this occasion must try (he fails) to make sense of a messiah figure whose fate in this venue is dourly predictable and whose humaneness seems, in this context, otherworldy. Elvissey (1993) incorporates the Elvis Presley myth into the ongoing sequence; and Random Acts of Senseless Violence (1993 UK) brings the sequence close to the present, conflating the ravaged life of a streetwise girl with the increasing entropy of a social system that has lost both energy and heart: ''Going, Going Gone (2000) '' (John Clute/Encyclopedia of SF, 3rd Edition).