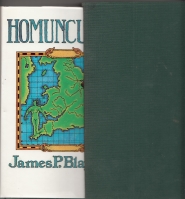 Homunculus (signed/limited but lacking the slipcase).

Grading: Fine copy in a fine dustjacket (but lacking the slipcase).

First published as an Ace paperback original in 1986. Winner of the 1986 Philip K. Dick Award for best novel. Introduction by Keith Roberts. LIMITED EDITION: 300 numbered slipcased hardcover copies signed by Blaylock, Keith Roberts, and artist Ferret and slipcased.. This issue adds ''A Postscript to Homunculus'' by William Hastings (a Blaylock pseudonym) and ''A Note on Mr. Hastings' Postscript'' by Blaylock (both not present in the trade hardcover).

''his books feature grotesques and eccentrics viewed with whimsical affection. These people often have crotchets and obsessions, and live in mutable worlds subject to curiosities and wonders whose explications -- while sometimes earnestly scientific -- are seen as hopelessly inadequate in the face of their absolute strangeness. The events of his books fall into odd patterns rather than linear plots, though the later works have a stronger narrative drive. HOMUNCULUS, a kind of prequel to The Digging Leviathan, is set in a Dickensian 19th-century London, and likewise features the spirit of scientific or alchemical inquiry, along with space vehicles, zombies and the possibility of immortality through essence of carp'' (Peter Nicholls/Encyclopedia of SF).

Grading: Fine copy in a fine dustjacket (but lacking the slipcase).

Homunculus (signed/limited but lacking the slipcase).