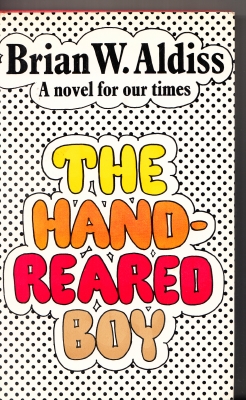 The Hand-Reared Boy (signed by the author).

Mainstream rite-of-passage novel (partly-autobiographical?), first in the Horatio Stubbs trilogy: followed by A Rude Awakening and A Soldier Erect. SIGNED BY THE AUTHOR.

''the 1970s also saw the author beginning to publish non-sf fictions more substantial than his previous two, The Brightfount Diaries and The Male Response). He gained his first bestseller and some notoriety with THE HAND-REARED BOY (1970). This, with its two sequels, A Soldier Erect (1971) and A Rude Awakening (1978), deals with the education, growth to maturity and war experiences in Burma of a young man whose circumstances often recall the early life of the author'' (David Pringle & John Clute/Encyclopedia of SF).

Title: The Hand-Reared Boy (signed by the author).

The Hand-Reared Boy (signed by the author).