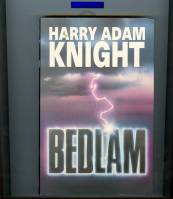 By: Brosnan, John and Leroy Kettle (as "Harry Adam Knight")

Grading: Faint spotting along page edges, else a fine copy in a fine dustjacket (as new).

SF/horror novel, made into a film BEYOND BEDLAM two years later.

''..he then went on to publish the first of his pseudonymous novels, most written in partnership with Leroy Kettle. These written equivalents of exploitation movies are slightly self-mocking but quite exciting as examples of Horror in SF; all are variants on the humans-being-destroyed-by-monstrous-things theme. Those as by Harry Adam Knight include Slimer (1983), filmed as Proteus (1995); Carnosaur (1984) by Brosnan alone, filmed as Carnosaur (1993); The Fungus (1985; vt Death Spore 1990); and BEDLAM (1992), filmed as Beyond Bedlam (1994). Those as by Simon Ian Childer are Tendrils (1986) and, by Brosnan alone, Worm (1987; 1988 US as by Harry Adam Knight). The acronyms formed by these pseudonyms, HAK and SIC, were no accident'' (John Clute/Encyclopedia of SF, 3rd Edition).

Grading: Faint spotting along page edges, else a fine copy in a fine dustjacket (as new).