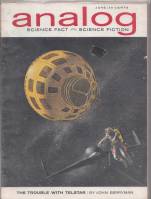 June, 1963 issue. Only twenty five large-size issues were issued between March 1963 and March 1965, before reverting to a smaller, digest-sized format that it still retains today. This issue includes a short novel by Poul Anderson (''Territory'') and novelettes by John Berryman and J. T. McIntosh. Oversize sf magazine (28 cm x 21 cm).