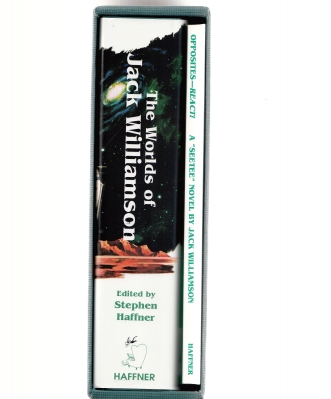 Edited by Stephen Haffner, foreword by Frederik Pohl, introduction by James Gunn and cover art by Vincent Di Fate: 720 pages. Assembled in this centennial tribute are several unpublished stories: ''The Moon Bird'', ''The Forbidden Window'', ''The Golden Glass'', and a film treatment from 1957, ''The Planets are Calling''. Also included are several classics in the Williamson canon such as the original novella-length version of ''Darker Thank You Think''; ''Minus Sign'', an unreprinted seetee story of anti-matter and terraforming; and a tale with the first use of psionics, ''The Man from Outside''. Contemporary stories include ''The Hole in the World'','' Afterlife'', and ''The Luck of the Legion'', the last Legion of Space adventure. Included are four essays from academics and scholars who have studied Williamson’s works, as well as Dr. Williamson’s 1957 Master’s Thesis, '' A Study of the Sense of Prophecy in Modern Science Fiction''.