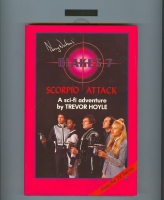 Novelisation of the cult UK TV series (1978-1981) based on the scripts written by Chris Boucher, James Follett and Robert Holmes.

''The series began rather crudely with some hoary sf cliches (political rebels against the totalitarian Federation are sent to a prison planet) but picked up considerably in later episodes of the first season, where Blake and his allies take part in spirited space-opera adventures in a miraculous spaceship (later to be operated by an ill tempered computer called Orac) which they find conveniently abandoned in space. Although free-spirited-rebels-vs-oppressive-empire is a theme straight from STAR WARS -- coincidentally, since the UK premiere of both was on the same day -- the feeling is very different. Blake's crew are quarrelsome, depressive, pessimistic and -- especially Avon -- cynical. Blake himself disappeared at the end of the second season, to reappear, apparently now on the wrong side, only at the very end. After the first season the series degenerated into sub-Dr Who tackiness, with much popping off of ray-guns in extraterrestrial quarries and poaching of secondhand plots (The Picture of Dorian Gray, etc.). The fourth season wound up on a depressing note as the bulk of the somewhat-changed cast were killed off by the villains. Despite this falling off, the series was addictive, and notable for the sense of doomed helplessness with which the rebels managed to inflict mere pin-pricks on the seemingly indestructible Federation - no doubt a reflection of the times, and seemingly not too off-putting for the audience, for Blake's Seven developed a large and passionate fan following, which it still retains'' (Peter Nicholls/Encyclopedia of SF).