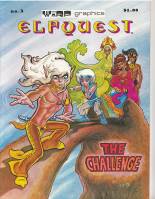 Elfquest no. 3: The Challenge.

Third issue. Elfquest began life in Fantasy Quarterly #1 (1978), but when its publishing company, Independent Publishers Syndicate, went out of business the Pinis went on to produce their saga independently as Warp Graphics, launching Elfquest no. 1 - 21 (1978 - 1985). Marvel Comics then picked up the title and reprinted the entire first run in their Epic line (1985 - 1988), and there further stories were released by Warp.

''epic cycle of comic-strip adult fairytales concerning a race of immortal, shapeshifting, telepathic elves, created by husband-and-wife team Wendy and Richard Pini. The myth-of-origin story told of a group of immortal beings forced to leave their dying home planet to search for a new world. One group finds a planet which they call The World of Two Moons, inhabited by a human-like race with a medieval society. This race has a mythology involving elves, and the immortals alter their appearance to resemble these and their spaceship to resemble a huge edifice. However, they are inadvertently thrown back in time to a prehistoric age, before the mythology was established, and find themselves feared and attacked by cavemen; those not killed are driven away from their ship. The story then shifts in time to an early medieval period (before that in which the spaceships landed) when there is a war between the elven descendants and the natives. The elves have been scattered into several different tribes by now, and the tales focus on one of these, The Wolfriders, who live in a forest environment and have formed very close links with wolves. Their leader is Cutter, whose adviser and confidant is Skywise. The elves can communicate telepathically- ''sending'' - and are impelled to reproduce with a member of the opposite sex who has exactly compatible strengths and talents, whom they instantly discern upon first meeting - a system which sometimes falls out well and sometimes not. The saga goes on to relate how the tribe is driven from the forest and encounters others of its kind in a desert, where Cutter recognizes his predestined mate, Leetah. The series draws in many other plot threads and continues to expand in scope and complexity'' (Ron Tiner Encyclopedia of Fantasy).

Title: Elfquest no. 3: The Challenge.

Elfquest no. 3: The Challenge.