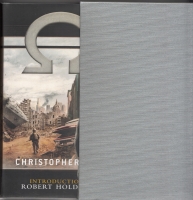 SF novel: introduction by Robert Holdstock. LIMITED SLIPCASED EDITION: from a total printing of 700 hardcovers printed (of which 500 were unsigned trade hardcover without dustjacket) this is one of 200 numbered copies signed by both authors with a dustjacket and and slipcased.

''Omega: an apocalyptic rumour from the Eastern Front. Omega: something that will alter all the strategic calculations of the Earth's great military blocs. Omega: the code name for a weapon that may well bring doomsday with it. But if Omega is indeed the agent that will destroy the world, that world is not our own. For this is a timeline in which World War Two never truly ended: a timeline in which Hitler died in a plane crash, Britain joined Germany in its battle against Communist Russia, and the present is an age of intermittent, but deadly, armed conflict between the USSR, the European Alliance, and the USA. The frontier regions are radioactive wastelands, nuclear winter threatens catastrophe, global confrontation could erupt again any time - and that's before Omega is taken into account...This is the reality experienced by Owen Meredith when an accident forces his consciousness from the England we know into the mind of his cognate self in that other darker, Europe.Switching back and forth between being plain Owen Meredith and troubled Major Owain Maredudd, Owen is faced not only with a Cold War going Hot, but with a deep crisis of identity. Who is he? Whose twisted destiny is he treading? Did the ordinary domestic life he remembers ever even take place? Perhaps the universe of Owain and Omega is merely a symptom of mental illness - but if so, why is it so urgently tangible?''