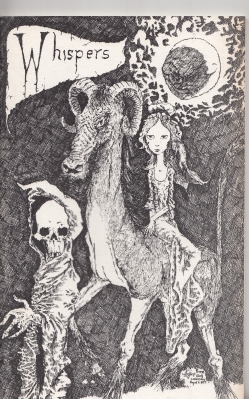 Eighth issue. Sixteen magazine issues (some were ''double issues'' and so the actual numbering goes from 1-24) were published of this US dark fantasy/heroic fantasy A5 magazine between 1973 - 1987 (with a final issue released ten years later in 1997, combined with Paul Ganley's Weirdbook magazine as a back-to-back publication). PRESENTATION COPY FROM THE EDITOR TO GERRY DE LA REE, INSCRIBED BY SCHIFF, SIGNED AND DATED 1/31/7 ON THE FIRST PAGE. Stamped ''Review Copy''.

''WHISPERS was originally planned as a continuation of August W. Derleth's The Arkham Collector (ten issues published Summer 1967-Summer 1971 and was thus to be called Whispers from Arkham, but legal considerations required the curtailed title. The intention was to provide news of forthcoming titles from Arkham House and other small presses - a service that Whispers continued to provide, although its news was often dated - but from the outset space was always made for fiction, articles and poetry. The fiction was initially mainly by H.P. Lovecraft disciples - the opening story, ''House of Cthulhu'' by Brian Lumley, being an indication of direction. By #2 the magazine's ambience had already clearly widened to encompass the broader WEIRD TALES school of authors - with stories from Fritz Leiber and Henry Hasse - and by the next issue Whispers had begun to establish its own identity, with fiction from writers of a new generation - establishing, in a way, a modern equivalent of the Weird Tales school. #3 (1974) featured Karl Edward Wagners ''Sticks'', based on an incident that had happened to artist Lee Brown Coye, who provided the cover. The story won the British Fantasy Award; Whispers itself went on to win the first World Fantasy Award in 1975. The emphasis on new work by Weird Tales writers never faded - later issues featured Hugh B. Cave, Carl Jacobi and Manly Wade Wellman - but Whispers increasingly became a core publication for new and even established writers at a time when markets for fantasy and supernatural fiction were poor. Contributors included Robert Aickman, Ramsey Campbell, David Campton, Dennis Etchison, Charles L. Grant, R.A. Lafferty, Richard Christian Matheson, William F. Nolan and Ray Russell. Whispers also featured good cover art by Tim Kirk, Stephen Fabian, Frank Utpatel and John Stewart'' (Mike Ashley/Encyclopedia of Fantasy).