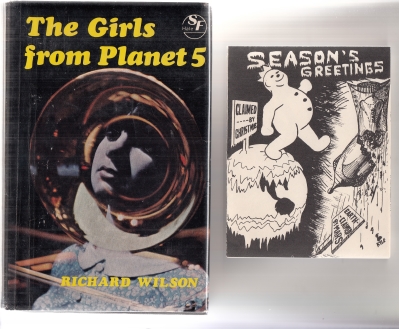 Grading: Page edges browning, a near fine copy in a G/VG edge-worn dustjacket.

''involved in sf fandom from an early age, he was a founder of the Futurians in the 1930s, publishing his first sf story, ''Murder from Mars'', with Astonishing Stories in April 1940. War service interrupted his career, but after 1950 - perhaps finding the new atmosphere in sf congenial to his gently satirical, humorous bent - he contributed prolifically to the magazines for some years, and soon published his first novel, THE GIRLS FROM PLANET 5 (1955), the first of three satires in which aliens comically invade Earth: the others were And Then the Town Took Off (January-March 1958 Infinity; 1960) and 30-Day Wonder (1960). In each, Wilson made use of the arrivals from outer space to generate mocking perspectives on our own behaviour: from the strident patriarchy still attempting, in the first novel, to keep Texas pure although the rest of the USA has become a matriarchy, to the appalling consequences, in the third, of being exposed to aliens who observe to the literal letter all Earth laws and enforce similar behaviour on us'' (John Clute/Encyclopedia of SF, 3rd Edition).

Title: The Girls From Planet 5.

Grading: Page edges browning, a near fine copy in a G/VG edge-worn dustjacket.