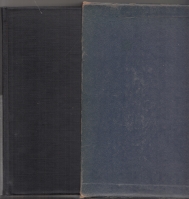 Exiles Of Time (signed/slipcased + inscribed by publisher + letter from author)..

Grading: Fine copy (as issued without dustjacket) in a good/worn card paper slipcase.

SF novel, first published in the Blue Book in May 1940. LIMITED EDITION: 112 copies specially bound and signed by the author and slipcased. INSCRIBED AND DATED (1975) BY THE PUBLISHER OSWALD TRAIN TO STUART SCHIFF. Also laid in is a 1969 typed/signed letter from Nelson Bond to Stephen (?) in which he states/''by the way in my opinion EXILES is a pretty bad book!'' he also says/''as to the battered slipcases..don't let that bother you too greatly. These slipcases were very badly made, and every one fell apart over the years..so a battered slipcase is par for the course''.

''his only full-length novel in book form, EXILES OF TIME (May 1940 Blue Book; 1949) is a dark-hued story about the end of the Age of Fire in Mu, told in a sometimes allegorical fashion; the protagonists, who have arrived in Mu via time travel, are unable to avert the cometary doom about to descend). It comprises the first of the extremely loose Squared Circle sequence, in which the three Ages preceding ours, as described in the Mayan Popul Vuh, are retold in sf terms'' (John Clute & David Langford.Encyclopedia of SF, 3rd Edition).

Grading: Fine copy (as issued without dustjacket) in a good/worn card paper slipcase.

Exiles Of Time (signed/slipcased + inscribed by publisher + letter from author)..