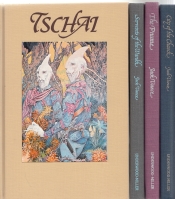 Grading: Fine copies as issued without dustjackets (as new).

All four volumes of the Tschai sf/fantasy series, first published as Ace paperback originals 1968-1970, then later in hardcover by Dennis Dobson in 1975. LIMITED EDITIONS: 111 numbered copies signed by the author and artist David Ireland (who provides a colour plate affixed to the front board for each of the four volumes). All four volumes no 24.

Grading: Fine copies as issued without dustjackets (as new).