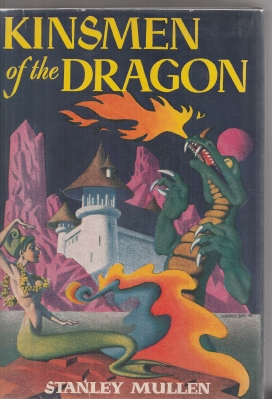 Kinsmen Of The Dragon.

''(1911-1974) US artist, museum curator and pulp author who wrote over thirty sf and fantasy stories, beginning with ''A Dero Named Clarence'' for The Gorgon in 1947, many of them Space Opera, often in Planet Stories magazine, until about 1959. His three books, from small presses, are KINSMEN OF THE DRAGON (1951), which pits the hero against a secret society whose magical science has roots in a parallel world which, being under the Sea, is accessible by submarine; Sphinx Child (1948), a fantasy short story; and Moonfoam and Sorceries (1948); the latter two titles were published by presses either owned or dominated by Mullen'' (Peter Nicholls & John Clute/Encyclopedia of SF, 3rd Edition).

Title: Kinsmen Of The Dragon.

Kinsmen Of The Dragon.