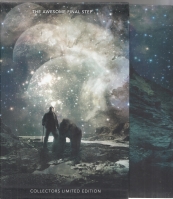 Grading: Fine copy in pictorial boards (as issued without dustjacket). In pictorial slipcase (as new).

''with Terry Pratchett, Baxter created the Long Earth series starting with The Long Earth (2012), a title which refers to a possible infinity of Parallel-World versions of Earth, and as well to the colourful journeys of exploration from world to world afforded the principal characters of the first volume, who include an AI Uploaded into an airship and a World War One soldier named Percy Blakeney. Exploration proceeds stepwise through the endless sequence of Earths, each connected to slightly different alternate versions to its ''east'' and ''west''; an ingenious touch in the first book is the discovery that, millions of steps from the Earth we know, one member of the sequence is missing - destroyed by a colossal spatial impact - so that here it is possible to step into Earth's empty orbit, allowing access to space without the need for rockets or Space Elevators'' (John Clute/Encyclopedia of SF, 3rd Edition).

Grading: Fine copy in pictorial boards (as issued without dustjacket). In pictorial slipcase (as new).