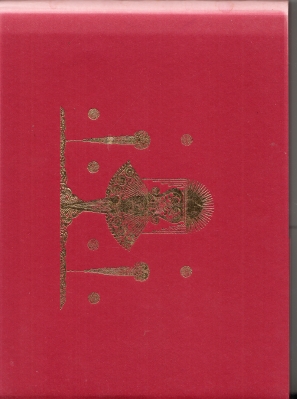 Weird novella. LIMITED EDITION: 100 numbered hardcover copies. This is no 1.

''in June 1962 an unusual novelty arrives in Baku. This is the roving troupe of Pan Soviet Players from Moscow, their aim to stage a performance of the obscure eighteenth-century play, The Mysterious Mother by Horace Walpole. Among this curious crew of actors, leading lady Petrina Yurebian carries a terrible secret from her girlhood years in the strife-torn enclave of Nagorno-Karabakh. With her is her thirteen-year-old daughter, Marinitsa, a child of outstanding loveliness who draws lustful eyes from the arts interlocutor of the Azerbaijani Supreme Soviet, Alim Ibrahim. He too bears a past from the ravages of Nagorno-Karabakh, a past that reaches further back still to the opposite side of the continent of Europe. While a mad matine is performed in Baku, in which simulacra of dead authors intrude, innocent Marinitsa and oleaginous Alim embark on a tour through the city: a tour that Alim intends will culminate in a gorgeously upholstered cellar beneath the warren of interlocking streets that is Icheri Shhr - the castellated ancient city of the caravanserais of the khans. Out of the peril which yawns before Marinitsa comes spiritual reclamation at a price. Forty-eight years further on, the aged representative of a religious community in Ireland journeys to Baku in quest of Petrina Yurebian, who has since died. His mission to follow the trail of a predatory renegade from the order who had fled in the 1940s. The fleer had been Liam O Briain but the same man was known to have been known to the Pan Soviet Players as Alim Ibrahim of Baku. Instead of Petrina, the elderly brother meets Marinitsa, now sixty-one years old, and alone, from whom he learns the terrible tale of the blight of her life and of her mothers life: a tale that conceals, like a sleek spider at its heart, a treacherous lecherous interlocutor - named Alim Ibrahim''.