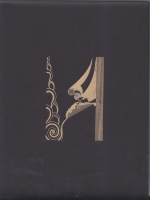 A Pallid Wave On Shores Of Night (100 numbered copies)..

''three composers vying for her secrets. Three composers snared in her web. If Europa has a soul, and true face, to whom is it revealed? Who does she beguile with beauty, even as she tramples peoples and nations underfoot? Does she reveal herself to the scholar, the painter, the statesman, the writer? Or does she, in her guise as the most exquisite abstraction of all, choose the composer, that solitary contender with, and lover of, the immaterial? And what does she demand from him in return? Three European composers in extremis encounter the hidden faces that Europe shows only to those on her fringes, or in her depths... In the hidden castles and profound karst caves of Slovenia, Anton Von Webern, that most austere of musical thinkers, finds that which shakes the devout faith in nature he has learned from the pages of Goethe and from the heights of his beloved Alps. Who are the reclusive aristocrats there and what is the true nature of their strange commission? After a disastrous performance, Jan Sibelius falls in with a dangerous crowd and loses himself in the besotted haze of a Helsinki night, where he evades the catastrophic embraces of a mysterious woman, performs in a drunken midnight concert with an orchestra of thieves, and barely escapes with his life to lie incapacitated, staring up into the pit of predawn where the blindly scattered stars mirror the disunity of a divided nation, a divided continent...Alexander Mosolov, expelled from the ranks of Soviet Composers, begins his journey East on a plane headed for the Gulag. There, as all boundaries, all notions of progress are erased by the whiteness of the sky and the drone of the engines, he bitterly regrets the false promise of his European education - then the drone stops and the plane halts, thousands of meters above the steppes. It is a rare phenomenon for an American author to master so finely the ethos and the pathos of a certain European milieu but Adam S. Cantwell has succeeded at that not only brilliantly but with much vigour and sensibility as well. Following loyally the shadows of the past Mittel-European masters of the weird literature and those forgotten genial Soviet misfits of the fantastica, A Pallid Wave on Shores of Night is a splendid achievement that invites awe and humility''.

Title: A Pallid Wave On Shores Of Night (100 numbered copies)..

A Pallid Wave On Shores Of Night (100 numbered copies)..