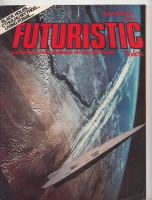 ''Australian letter-size magazine published by Don Boyd and Ray Maultsaid (who was also the editor-in-chief) from Sydney, New South Wales. It ran for five issues, the first undated (March 1980) to February 1982. It was a strange mixture of weird facts and immature sf. Boyd was a dedicatee of strange phenomena and the unexplained (the province of Charles Fort), and this flavoured the first issue; later issues saw some development of sf with a stronger scientific base. The magazine struggled to find its own voice, however, and to please its market, despite growing support from Australia's fans. With its final issue the title shifted to Australian Futuristic Science and the emphasis shifted back to weird science and the unexplained'' (Mike Ashley/The Encyclopedia of SF).