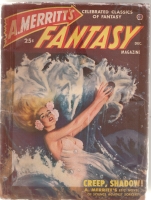 ''US Pulp magazine, 5 issues, December 1949 to October 1950, published by Popular Publications under their imprint Recreational Reading, Inc. No editor was credited, but it is believed to have been Harry Widmer, though Mary Gnaedinger may well have also been involved. A Merritt's Fantasy Magazine was a companion magazine to Famous Fantastic Mysteries and Fantastic Novels, and was begun in response to the considerable enthusiasm engendered by the reprinting of A Merritt's fiction in those magazines and elsewhere. Until the appearance in 1954 of Vargo Statten Science Fiction Magazine, and then in 1977 of Isaac Asimov's Science Fiction Magazine (now Asimov's Science Fiction), A Merritt's Fantasy Magazine was the only sf magazine which attempted to build its appeal on the popularity of a single author - even though Merritt himself had died in 1943 and much of his fiction was available elsewhere. In any event, the magazine failed to establish itself. A Merritt's Fantasy Magazine also published reprints of stories by other authors, all taken from the earlier Munsey magazines'' (John Clute & Peter Nichols/Encyclopedia of SF, 3rd Edition).