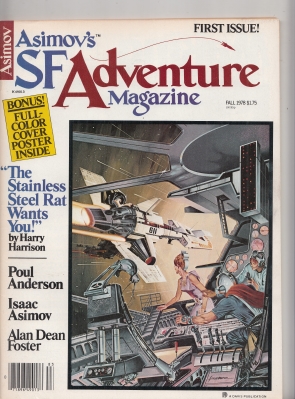 ''US sf and fantasy magazine, a companion to Isaac Asimov's Science Fiction Magazine, four issues published, Fall 1978 to Fall 1979. Following the success of the original 1977 Star Wars film, Asimov's SF Adventure was aimed at a younger, less discriminating audience than its elder companion magazine, though at the time that too was targeting younger readers. It sought to fill the gap once held by Planet Stories which was essentially to publish stirring space adventures. Sales of the first issue were sufficiently promising to publish quarterly, and the remaining three issues improved steadily in quality. But after four issues, and a loss of some $50,000, publisher Joel Davis decided to drop the magazine, and it did not seem to be missed'' (Mike Ashley/Encyclopedia of SF, 3rd Edition).