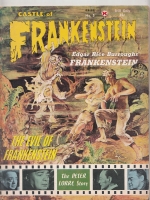 By: CASTLE OF FRANKENSTEIN, (US horror/film magazine)

Four issues (5, 9, 19 and 22) of an American horror, science fiction and fantasy film magazine: 25 issues, plus one annual (the 1967 Fearbook); published in total 1962-1975 by Calvin Thomas Beck's Gothic Castle Publishing Company. Although promoted and sold as a ''monster magazine,'' readers were aware that Castle of Frankenstein, at the time, was the only nationally distributed magazine devoted to a legitimate and serious coverage of B movies. In addition to its central focus on classic and current horror films, Castle of Frankenstein also devoted pages to amateur filmmakers and fanzines. During its primary run, Castle of Frankenstein outlasted the majority of monster magazines that filled the market for two decades, with the notable exception of Famous Monsters of Filmland. In 1999, publisher Dennis Druktenis revived both Castle of Frankenstein (releasing ten more issues) and the original title Journal of Frankenstein (releasing five more issues).