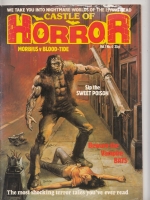 4th issue. B/w comic strips: ''Castle of Horror was something of an oddity, which reprinted (along with its sister title Tales of Terror) reprinted stories from the black and white American Marvel Comics magazines Vampire Tales and Blade the Vampire Slayer, under licence. Unfortunately, while the two titles were indeed licensed by Marvel in the US, the parent company had inexplicably neglected or forgotten to inform Marvel UK of the deal, which led to a certain amount of resentment since Marvel UK understandably felt that this was seriously infringing on their territory. Following a formal complaint, the deal was terminated and both Castle of Horror and Tales of Terror were cancelled after five monthly issues'' (Albion British Comics database).