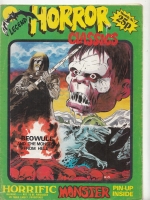 No 7. Colour comic strip plus large fold out poster with additional articles/art (by Stephen Jones and fan artist Jim Pitts, this issue states). Nine issues published in total 1975-1976: '' a poster magazine. Each issue focused on a different monster or other horror subject. The first issue was dedicated to Dracula, with photos of various screen vampires on the cover and a strip adapting the 1973 film version with Jack Palance and Simon Ward. Issue 2 had a Frankenstein retelling based primarily on the 1931 Universal film, although Victor Frankenstein was drawn to resemble Peter Cushing, who played him in the Hammer series. Later topics covered were The 7th Voyage of Sinbad in issue 3 (which presumably qualified for a horror magazine by dint of Ray Harryhausen's monsters), Blood Lust of the Zombies in issue 4, Hammer's Dracula has Risen from the Grave (under the title ''Dracula Must be Destroyed'') in issue 5, Terror from Space in issue 6 and the story of Beowulf in issue 7 (whose strip was drawn by Derek Tyson) Although Legend Horror Classics continued for a few more issues, from issue 10 onwards it no longer run comic strips''.