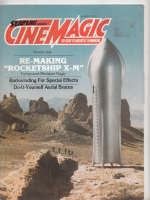 Starlog Presents Cinemagic: The Guide To Fantastic Filmmaking vol 1 no 1 (+ f others).

''originally a Fanzine issued by Don Dohler for eleven photocopied issues from 1972 to 1979. Relaunched in 1979 by O'Quinn Publications. This was the first US magazine to offer instructions on how to create special effects for amateur films. It began as a fanzine published by Dohler alone, with severely limited distribution. In 1979, O'Quinn Publications purchased the rights to the title and subsequently issued it as a prozine published through most of the 1980s. The magazine offered advice on everything from matte paintings to building model Spaceships to stop-motion animation for Dinosaurs and other creatures. Cinemagic was never a huge success in terms of sales, but helped launch the careers of a number of professionals in the film and Television industries, including J J Abrams and Tom Sullivan'' (Geoffrey Stevens/Encyclopedia of SF, 3rd Edition).

Title: Starlog Presents Cinemagic: The Guide To Fantastic Filmmaking vol 1 no 1 (+ f others).

Starlog Presents Cinemagic: The Guide To Fantastic Filmmaking vol 1 no 1 (+ f others).