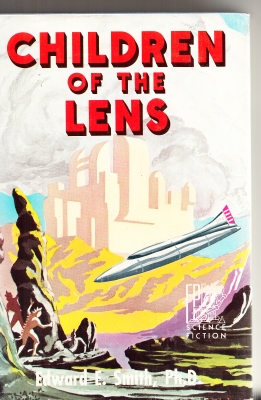 Children of the Lens [first binding/Currey A].

Grading: Inked number at top of front free endpaper, elae a fine copy in an almost fine dustjacket with light spotting to the rear panel.

SF novel, sixth and last in the Lensman (History of Civilisation) series. First and earliest binding (Currey A) of blue cloth, spine lettered in gold. See L. W. Currey: SF and Fantasy Authors: A Bibliography of First Printings Of Their Fiction p. 456.

''it was not until he began to unveil the architectural structure of his second and definitive series that Smith was able to demonstrate the thoroughness of his thinking about Space Opera. And it is with the Lensman series - or The History of Civilization, the over-title for the 1953-1955 limited-edition boxed reprint of the original books - that his name is most strongly and justly associated. In order of internal chronology, the sequence is Triplanetary (January - April 1934 Amazing; rev to fit the series 1948), First Lensman (1950), Galactic Patrol (September 1937 - February 1938 Astounding; 1950), Gray Lensman (October 1939 - January 1940 Astounding; 1951), Second-Stage Lensmen (November 1941 - February 1942 Astounding; 1953) and CHILDREN OF THE LENS (November 1947 - February 1948 Astounding; 1954). The Vortex Blaster (stories July 1941 - October 1942 var mags; fixup 1960; vt Masters of the Vortex 1968) is also set in the Lensman Universe, probably some time before Children of the Lens, but does not deal with the central progress of the main series, the working out of which was Smith's most brilliant auctorial coup. As published in book form, the first two novels likewise stand outside the main action; it is the final four that constitute the heart of Smith's accomplishment. Conceived as one 400,000-word novel, and divided into separate titles for publication 1937-1948 in Astounding - their release beginning before John W Campbell Jr began editing the magazine, extending through the high pitch of the Golden Age of SF (1939-1942) Campbell supervised, and into the post-World War Two period - this central Lensman tale is constructed around the gradual revelation, paced by moments that for many readers caught the essence of the Sense of Wonder, of the hierarchical nature of the universe: a sense that the universe was both infinitely surprising but, in the end, controlled by Arisians.'' (John Clute/Encyclopedia of SF, 3rd Edition).

Title: Children of the Lens [first binding/Currey A].

Grading: Inked number at top of front free endpaper, elae a fine copy in an almost fine dustjacket with light spotting to the rear panel.

Children of the Lens [first binding/Currey A].