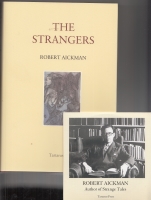 The Strangers And Other Writings [+ Aickman DVD documentary].

294 pages. Includes previously unpublished and uncollected short fiction, non-fiction and poetry by Robert Aickman. Laid in is the DVD (a documentary on Aickman by the publishers) which was issued with the book 450 copies printed.

''Dating from the 1930s to 1980, the contents show his development as a writer. Six unpublished short stories, augmented by one written for broadcast, follow his fiction from the whimsical through the experimental to the ghostly, with The Strangers a fully-formed, Aickmanesque strange tale. The non-fiction samples Aickmans wide-ranging interests and erudition: from the supernatural to Oscar Wilde; from 1940s films to Delius; from politics to the theatre; from Animal Farm to the canals. Accompanying this book is a fifty-three minute DVD documentary Robert Aickman, Author of Strange Tales. Featuring rare film, photographs and audio recordings, the film sheds new light on Aickmans role in the development of the ghost story, his interest in restoring the British canal system and his wider involvement with the arts. Jean Richardson and Heather and Graham Smith share their memories of Aickmans friendship, and writers Jeremy Dyson and Reggie Oliver evaluate Aickmans literary legacy''.

Title: The Strangers And Other Writings [+ Aickman DVD documentary].

The Strangers And Other Writings [+ Aickman DVD documentary].