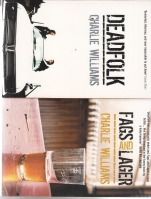 ''no-one leaves Mangel - at least not alive they don't. Royston Blake is the Head Doorman of Hoppers Wine Bar & Bistro. He drives a Capri 2.81 and can walk down the street In Mangel knowing he's respected by folks. But now there's a rumour out that Blake's lost his bottle. Even Sal's heard the rumour. What's more, the Muntons are after him and the thought of ending up in the back of their Meat Wagon is a...
View More...