The Planet Suite (signed & dated by the author).

The Days Of The Dodo (inscribed by the author).

Collection of non-fiction pieces on writing (and other stuff!), most of which first appeared in The Third Alternative magazine (TTA). INSCRIBED AND SIGNED BY THE AUTHOR/''to John, go Dodo! Allen Ashley''. View more info

The Days Of The Dodo (50 signed copies).

Collection of non-fiction pieces on writing (and other stuff!), most of which first appeared in The Third Alternative magazine (TTA). LIMITED EDITION: 50 numbered copies signed by the author. This is no 35. View more info

Once And Future Cities (inscribed by the editor).

478 pages: collects 22 sf/fantasy stories, most of which first appeared in small-press magazines with five original to this collection. INSCRIBED AND SIGNED BY THE AUTHOR. View more info

Where Are We Going? (signed by various).

Original sf/fantasy/''slipstream'' anthology. THIS COPY SIGNED BY THE EDITOR AND CONTRIBUTORS JOEL LANE, GARY BUDGEN, TERRY GRIMWOOD, A. J. KIRBY, MARION PITMAN AND JET McDONALD.''themed collection of stories based on the idea that the world we live in is still something of an unknown planet, with spectacular encounters, adventures and mysteries still very much possible. The result is a collection of tales of urban decay and angst - jaunts to unexpected and unexplained kingdoms - holidays and excursions to strange and unnerving destinations. A familiar earth that's slightly skewed - o... View more info

Gateways To Forever: The Story Of The Science Fiction Magazines From 1970 - 1980.

Third of three volumes: 288 pages. A complete revision and expansion of the author's earlier series on the history of the sf magazines, published 25 years earlier. View more info 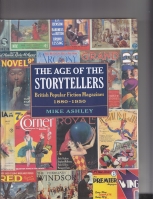 Condition: Fine copy in pictorial boards, as issued without dustjacket.

308 pages: co-published by The British Library and Oak Knoll Press: Newcastle, Delaware. Survey of seventy of the major popular fiction magazines of the period 1880-1950 such as THE STRAND, THE WINDSOR, NASH'S and so on. Athough it covers the whole range of fiction it does single out a lot of early science fiction, weird fiction, supernatural and so on: 308 pages. Laid in is a compliments slip from Mike Ashley on which is handwritten/''Hugh, I hope you enjoy it. I've also enclosed a copy of that E. F. Benson story. Do you recognise it? Mike''. Laid in are zerox sheets of the E. F. Benson... View more info

Original anthology of 23 sf/fantasy stories, authors include Ian Watson, Stephen Baxter, Pete Crowther, Richard A. Lupoff, Brian Stableford, Justina Robson, Tim Lebbon, Adam Roberts and Liz Williams. Hugh Lamb's copy with his signature and date (7 Jan 2005) at the top corner of the front free endpaper, and his initials HL rubber-stamped on the inside rear cover. Hugh has also written ''see pp. 113 + 143'' below his signature. Laid in is a compliments slip from the editor to Hugh Lamb with/''Hugh, as promised. Check out the surprise at the end of Pete's story. Mike''. This refers to Pete... View more info

The Mammoth Book Of FairyTales.

628 pages: collects 56 stories (mostly reprints but including a few originals), with a short introduction and 25-page afterword by the editor. View more info

The Mammoth Book Of Science Fiction.

The Camelot Chronicles: Heroic Adventures From The Age Of Legend.

The Mammoth Book Of Comic Fantasy 11.

494 pages: 34 stories, mostly reprints, but with a few original stories, including ones by Gene Wolfe and Charles Partington. View more info

Condition: Fine copy in a near fine dustjacket with light dustsoiling to rear (white) panel.

SF/fantasy novel set in Atlantis: 'excellent characterization in sentimental epic tradition'' (Anatomy of Wonder: 1987, 3-15).''UK writer whose first sf novel, The Breaking of the Seals (1946), sets a psychic time-traveller into a prehistoric world where primitive society ends in chaos with the breaking up of Bahste, Earth's then moon; a Deluge follows. Its thematic sequel, ALAS, THAT GREAT CITY (1948), set in Atlantis, propounds a similar catastrophe, with a new planet arriving to become the Earth's moon and sinking the continent. Wrong Side of the Moon (1952), written with Stephen A... View more info

SF novel, sequel to FANTASTIC VOYAGE (1966).''twenty-one years ago when the movie FANTASTIC VOYAGE was released, Asimov was hired to do the novelization. The book was successful but, to Asimov, not satisfying, for ``I never felt it to be entirely mine.'' Now he has rewritten it his way, and it's good. The story concerns Albert Jonas Morrison, a 21st century neurophysicist, and otherwise an ordinary and unheroic man, who is kidnapped and taken to the Soviet Union. A major Soviet scientist, Pyotr Shapirov, is in an irreversible coma, and Morrison's special expertise could be of value. Th... View more info

Condition: Page edges show a little browning and light spotting, else a fine copy in a VG+ dustjacket with edge wear and a little fading og NIGHTFALL on the spine (from red to pink): with review slip lad in.

Classic sf robot stories. Some of these robot stories were adapted for the BBC television series Out of the Unknown. Although Harlan Ellison wrote a screenplay for I, Robot in 1978 - eventually published as I, Robot: The Illustrated Screenplay (1994) - the film I, Robot (2004) is unrelated to this script and connected only distantly to Asimov's stories.''..it was the third story of the Robot series, ''Liar!'' (May 1941 Astounding), that saw the introduction of the Three Laws of Robotics, whose formulation Asimov credited essentially to Campbell, but which Campbell credited essentiall... View more info

Visions Of Fantasy: Tales From The Masters.

The Dream of the Stone.

Long running fantasy series.''US writer and anthologist who began publishing sf with The Cold Cash War (1977) and several further sf novels; he has become much better known, however, for fantasy, especially for the Myth series of Arabian Fantasy romps, his most accomplished work. According to the author, the series, which features the adventures of a wacky duo of magician and demon, is based on the ''Road To...'' movies featuring Bing Crosby and Bob Hope, and treats its large array of fantasy figures in an appropriately slapstick manner somewhat after the fashion of L. Sprague De Camp... View more info

Long running fantasy series. Wonderful wraparound cover art by Phil Foglio.''US writer and anthologist who began publishing sf with The Cold Cash War (1977) and several further sf novels; he has become much better known, however, for fantasy, especially for the Myth series of Arabian Fantasy romps, his most accomplished work. According to the author, the series, which features the adventures of a wacky duo of magician and demon, is based on the ''Road To...'' movies featuring Bing Crosby and Bob Hope, and treats its large array of fantasy figures in an appropriately slapstick manner ... View more info

What Dreams May Come.

Condition: Near fine copy in a VG+ dustjacket with small light stain to rear panel.

The Ghost Book: Sixteen New Stories Of The Uncanny.

August 1958 issue. Includes part 1 of 2 parts of WE HAVE FED OUR SEA by Poul Anderson, plus stories by Christopher Anvil and Robert Silverberg. View more info

September 1958 issue. Includes the conclusion to WE HAVE FED OUR SEA by Poul Anderson, plus stories from Christopher Anvil, Gordon R. Dickson and James H. Schmitz. View more info

Condition: Wear to bottom spine edge, else a near fine (NF) copy.

Condition: Page edges a little browned, else a fine copy in a fine dustjacket (as new).

Supernatural novel. The plot resembles (in som ways) that of 1973 film The Wicker Man.''a London policeman comes to a remote English village dominated by the presence of ancient monolithic stones. On the autumn night of Samain the dead come back to life''. View more info 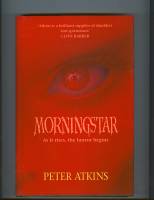 The author's first novel. Vampires.''the best first novel I've read in a long time: an audacious and heady mixture of vampires, ghosts, goddesses and psychopaths'' (Neil Gaiman). ''Atkins's background as a writer of artistic splatter movies - he worked on the first Wishmaster film and three Hellraiser films--is obvious in this fast-paced horror-suspense novel, first published in the U.K. in 1992. A serial killer who signs the word Morningstar in the blood of his decapitated victims is stalking the streets of San Francisco. Donovan Moon, a flat-broke freelance journalist, gets a tip ... View more info

68 pages: combination of a play The Twilight Limited (four acts) interspersed with three stories - one each from Atkins and Hirshberg, plus ''Call Home'' by Dennis Etchison. The play itself was performed at three venues in Southern California in October 2007 by the three authors and musicians. View more info