November 1975 issue. 120 pages, edited by Peter Nicholls. Articles, reviews and letters. Includes a ten page piece by J. G. Ballard ''Some Words About Crash!''. But pride of place goes to Keith Roberts' six-page letter, replying to David I. Masson's review of his novel THE CHALK GIANTS (and including Mason's own three-page response to that letter!) in the previous issue.
View More...

By: FOUNDATION, (The International Review Of Science Fiction)

Autobiography: ''a grimly hilarious and acutely observed trawl through the arse-end of the British Film Industry, which turns into an afeecting search for friendship and happiness''.
View More...

Condition: Fine copy as issued without dustjacket (as new).

The Murder Mystique: Crime Writers On Their Art. 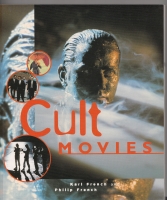 The Craft Of The Untamed.

Condition: Fine copy in a fine dustjacket (as new) but for creasing along both spine edges.

182 pages: ''an inspired vision of traditional witchcraft''.''a proper tradition is defined as a timeless unity. Outwardly the tradition bears a great diversity across different lands and spirit. Traditional witchcraft is found in various sodalities and groups across the world. Even so it is possible to discern several harmonious, shared themes. These themes are the land, the crossroads, death, night and the mountain of Venus. It is witchcraft where a human and angelic blood mingles to form a special pedigree that has shaped the archetypical image of the witch. Traditional witchcraft i...
View More...

Futures Past: A Visual Guidebook to Science Fiction History no 4.

By: FUTURES PAST, (ed. Jim Emerson)

Art Of Darkness: The Cinema Of Dario Argento.

302 pages: b/w stills and some colour throughout.
View More...

206 pages. INSCRIBED AND SIGNED TO UK HORROR EDITOR HUGH LAMB. With Hugh's signature and date (15/7/15)) at the top corner of the same page. Made into a feature film by the author Kevin Gates and Michael Bartlett. A seemingly very uncommon item (not sure why)..''the ruined Old St Mary's church in Clophill, Bedfordshire has an enormous reputation for the occult and paranormal. In 1963, graves were desecrated and a skull was impaled on a spike inside the church. Bones were found arranged on a makeshift altar, along with the remains of a cockerel in the celebration of a black mass. Th...
View More...

Murder 'Whatdunit': An Illustrated Account Of The Methods Of Murder.

248 pages: ''an illustrated A to Z of murder intended to meet the crime buffs's interest in understanding the mechanisms of homicide, its investigation & detection''.
View More...

The American Private Eye: The Image In Fiction.

The American Private Eye: The Image In Fiction. 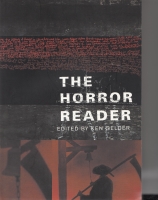 414 pages: collection of 29 essays and articles on horror.
View More... 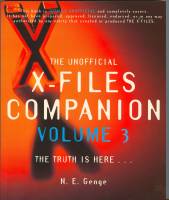 The Ghost Story Society Newsletter: no 1 - no 15 (Hugh Lamb's copies).

The first fifteen issues of the Ghost Story Society Newsletter, an unbroken run from no 1 (August 1988) to no 15 (March 1994)5): 16-36 pages each issue. All edited by Jeff Dempsey, except for the last two, when Barbara Roden took over. All fifteen issues from the library of UK horror editor Hugh Lamb, with annotations and highlighting (usually when his name is mentioned!) by him in the early issues.
View More...

Crime In Good Company: Essays On Criminals And Crime-Writing.

Horror's Heart: A Short Call Of Cthulhu Campaign In Montreal.

By: Gillett, Sheldon (CALL OF CTHULHU) 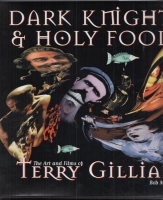 Dark Knights And Holy Fools: The Art And Films Of Terry Gilliam.

By Bob McCabe: 192 pages Heavily illustrated in full colour.''First fully authorised book to trace the life and work of one of the most innovative film-makers of the century. Fabulously illustrated, it features many previously unseen photographs, storyboards and drawings from Gilliam's private archive. For the first time Gilliam talks at length about the creation of Python, his first attempt at directing and the inside stories of making: Time Bandits, Jabberwocky, Brazil, Twelve Monkeys, The Fisher King, and Fear and Loathing in Las Vegas. The book includes interviews with John Cle...
View More...

Condition: Some rusting to staples, a VG/VG+ set overall, the worst copy being the first issue which has edge loss to the first two pages due to what looks like rodent nibbling (?).

17 of the 18 issues published 1947-1950 of the UK sf fanzine, comprising reviews, articles and news, missing just the second issue.. A continuation of the earlier ''Scientifiction - The British Fantasy Review'' which Gillings had edited a decade earlier (1937: seven issues total), but with a new name. Scarce early British sf fanzine/magazine. Octavo, eighteen issues, pictorial self wrappers, stapled. Professionally printed as a neat twenty-page booklet (later growing to thirty-two and even forty pages), it was edited with Gillings' usual polish. Gillings also wrote most of the contents, o...
View More... 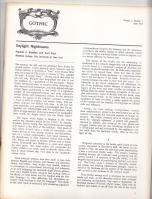 Suspense In The Cinema.

144 pages with b/w stills: ''it is not a mere catalogue of suspense films. It is an in-depth study of the components of suspense and the motivations of the audience. The characteristics of isolation, irony, phobia, accident, and other elements of thrillers are examined by themselves and in relation to films as entities. SUSPENSE IN THE CINEMA will not make it less terrifying to see films such as PSYCHO or WARNING SHOT, but it will explain why you are terrified.''.
View More...

Condition: Near fine copy in a VG dustjacket.

Non-fiction: account of the celebrated 1762 London murder trial in which ''Scratching Fanny'', the spirit of Frances Lynes, accused her helpless lover, William Kent, of murdering her by poison as she lay sick of the smallpox. Includes the transcript of the evidence given at the trial of the principals involved.
View More...

Apertures: A Study Of The Writings of Brian W. Aldiss (from the author's own library).

Condition: Fine copy as issued without dustjacket (as new).

262 pages. Part of Greenwood Press's Contributions to the Study of Science Fiction and Fantasy (vol 8). This copy is from Brian Aldiss's own library, with a white printed label signed by Wendy Aldiss affixed on the rear pastedown, stating/''This book was a personal copy of the author Brian W. Aldiss, part of his effects at his home at the time of his death in August 2017. Wendy Aldiss, Literary Executor Brian Aldiss Estate''.
View More...

The Encyclopedia Of Ghosts And Spirits: Second Edition.

A run of eight issues - from no 16 (February 1980) to 23 (December 1980).31 issues of this non-fiction media slick magazine were published from April 1978 to December 1981, mostly monthly.''an attempt to establish a more science-fact oriented companion to Starlog, this magazine was initially entitled Future but with the March 1979 issue became Future Life to avoid confusion with a similarly-titled economics publication. It featured interviews with many sf notables including Gregory Benford, Harlan Ellison, Ursula K Le Guin, Frederick Pohl, Larry Niven, Robert Silverberg, Theodore Sturg...
View More...

Who Done It? A Guide To Detective, Mystery And Suspense Fiction.

By: Hagen, Ordean A.

Condition: Almost fine copy, as issued without a dustjacket.

The Man Who Was Frankenstein.

Condition: A little browning along the top page edges, else a fine copy in a fine dustjacket (as new).

Book-length theory that the inspiration for Victor Frankenstein in Mary Shelley's novel Frankenstein was based on an eccentric English scientist whom Mary had seen and heard lecture on the then mysterious and fantastic medium of electricity - Andrew Crosse.
View More...

A Dictionary of Vampires (presentation copy to Hugh Lamb).

Condition: Fine copy in a fine dustjacket (as new) but for a touch of edge wear.

288 pages: an A-Z of vampires: non-fiction. PRESENTATION COPY FROM HAINING TO FELLOW UK HORROR EDITOR HUGH LAMB/''for Hugh, who has supped with the Un-Dead for almost as long as I have! With very best wishes Peter Haining, September 2001''. With Hugh Lamb's signature and date (23/9/01) in the top corner of the same page. Uncommon UK hardcover.
View More...

The Monster Trap And Other True Mysteries (Hugh Lamb's copy).

A Dictionary of Vampires.

The Un-Dead: The Legend Of Bram Stoker And Dracula. 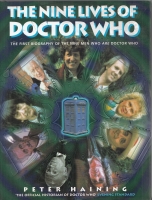 The Nine Lives Of Doctor Who.

By: Haining, Peter (DOCTOR WHO) 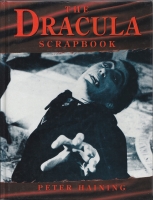 Condition: Fine copy in a near fine dustjacket with a little wear and tear along the top edge of the spine panel.