Part reprint, part original horror anthology. 17 volumes published in total between 1966-1984 of THE FONTANA BOOK OF GREAT HORROR STORIES, the first four edited by Christine Bernard, and the rest by Mary Danby. ''First published by Fontana Books, 1972'' stated on the copyright page. Hugh Lamb's copy, with his initials HL rubber-stamped on the inside back cover. View more info

Armada C362. Young adult supernatural anthology, third in the series: mostly reprints but including original stories by Sydney J. Bounds, R. Chetwynd-Hayes and the editor herself. 15 volumes in total were published between 1967 - 1983, the first two edited by Christine Bernard, the rest by Mary Danby. Hugh Lamb's copy, with his initials HL rubber-stamped on the inside back cover. An uncommon 1970 UK paperback. View more info

Armada C818. Young adult supernatural anthology, sixth in the series: by now (earlier volumes contained more reprints) mostly (if not all) original stories. 15 volumes in total were published between 1967 - 1983, the first two edited by Christine Bernard, the rest by Mary Danby. Hugh Lamb's copy, with his initials HL rubber-stamped on the inside back cover. View more info

Deceit: Doctor Who, The New Adventures.

The Menagerie: Doctor Who, The Missing Adventures.

The Floating Continent (signed by the author).

Title change: published earlier in hardcover as THE SEARCH FOR ZEI (Avalon, 1962). SIGNED BY THE AUTHOR. View more info

Title change: published earlier in the US as THE SEARCH FOR ZEI (Avalon 1962). Compact F321. View more info

Title change: first published with the title COSMIC MANHUNTas half of an Ace Double (D-61) in 1954: later published with textual revisions as THE QUEEN OF ZAMBA (1977). Compact F311. View more info

Conan And The Spider God.

The Clocks of Iraz (signed by the author).

Condition: Near fine (NF) copy with creasing along bottom edge of rear cover.

Fantasy novel: ''the deadly swipe of swords and sorcery''. SIGNED BY THE AUTHOR. View more info

Condition: Bottom third of rear cover missing (cut out), else a VG+ copy.

Eugenie de Franval And Other Stories. 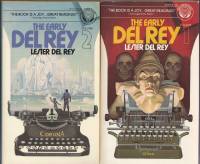 Condition: Fine (unread) copy with the signature of sf writer John Clute on the first page.

Issued to coincide with the release of WEST 11, a 1963 British crime film directed by Michael Winner and based on the play THE FURNISHED ROOM written by Laura del Rivo and adapted for the screen by Willis Hall and Keith Waterhouse. Pan X192. A very uncommon UK paperback. View more info

The Towers Of Toron.

First published as half of an Ace Double (F-261) in 1964: however this first UK edition is revised and expanded (the author's preferred text). See Currey p. 140. View more info

Laser 36. SF novel.''Canadian sf imprint initiated in 1975 by Harlequin Books, the US publisher of Mills & Boon romances, under the editorship of Roger Elwood. The books were restricted to a formula which specified a male protagonist, an upbeat ending, no sex or atheism, and a minimum of long words. All Laser Book covers were the work of Frank Kelly Freas. The series was suspended early in 1977 after fifty-seven books had appeared. The Laser formula made it unlikely that books of any literary quality would be published, but some were interesting, including K W Jeter's debut, Seeklight... View more info

Our Friends From Frolix 8.

Our Friends From Frolix 8.

Condition: Gift inscription and date on the title page, a near fine (NF) copy.

Abridged contents and title change: contains eight of the eighteen stories found in the young adult anthology THE RESTLESS GHOST AND OTHER ENCOUNTERS AND EXPERIENCES, published in hardcover by Collins in 1970. Hugh Lamb's copy, with his initials HL rubber-stamped on the inside rear cover. View more info

Juvenile ghost novel based around Borley Rectory, ''the most haunted house in England''. View more info

Second in a series of pulp hero novels written by the authors. View more info

The Puppies Of Terra.

SF novel. Published earlier in the USA as MANKIND UNDER THE LEASH (Ace Double G-597, 1968). Expansion of the earlier story ''White Fang Goes Dingo'' (from Worlds of If magazine, 1965). View more info

Arrow 484. First published as a Compact paperback in 1966 as ONE HUNDRED AND TWO H BOMBS, this retitled edition contains seven additional stories not present in the earlier edition. View more info

One Hundred And Two H Bombs And Other Science Fiction Stories. 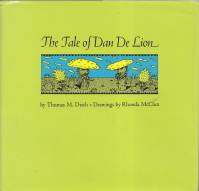 The Tale of Dan De Lion.

One Hundred And Two H Bombs And Other Science Fiction Stories.

Condition: Page edges a little browned, a near fine (NF) copy with a touch of spine edge wear.

Echo Round His Bones.

Condition: Fine (unread) copy but for slight rusting to rear staple and a little wear at top and bottom of spine.

Every Wall A Door: Exploring Psychic Surgery And Healing.

First published in hardcover in 1973. Part of the 'Corgi Library Of Psychic Exploration' series, no less. View more info

The Oracle Of Change: How To Consult The I Ching.

Collects twelve stories. Abridged contents: ''a fuller version of this anthology was first published in Great Britain in 1976 under the title CLASSIC TALES OF HORROR'' stated on the copyright page. Hugh Lamb's copy with his initials HL rubber-stamped on inside rear cover: View more info

Collection of stories written by Adrian Conan Doyle (the son of Arthur Conan Doyle). First published in hardcover by John Murray in 1960. Hugh Lamb's copy with his initials HL rubber-stamped on the inside back cover. View more info