A Haunting Beauty: Stories Of The Macabre.

Collects 13 weird/supernatural stories, with a five page preface by Mike Ashley, and four page introduction from the author. 450 numbered hardcover copies printed.''In the 1960's one author was almost solely responsible for keeping the horror genre alive in Britain, Sir Charles Birkin. In the years from 1964 to 1971 the author produced a string of powerful collections including The Kiss of Death, Spawn of Satan, and The Smell of Evil. In the early 1980's the author and editor Mike Ashley undertook the preparation of a retrospective showcase of the author's work. Efforts to market the ... View more info

Collects eleven sf stories most of which had been originally published in the sf magazines/pulps of the early 1940's: edited and with an introduction by John Pelan. First of a projected set of five volumes that will collect all of Cartmill's fiction, though I don't think any further volumes have yet appeared. 500 copies printed.'' Heinlein, Simak, Hubbard, de Camp, Cartmill... These are the foundations upon which John W. Campbell built the Golden Age in Street & Smith's Astounding Science Fiction and Unknown Worlds. All of these authors have had much of their fiction collected and... View more info 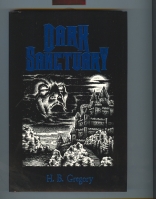 Originally published in 1940 (Rider & Co.: London), this reprint contains a new introduction by D. H. Olson. Scarce in it's original edition, Karl Edward Wagner listed this book as one of the thirteen best novels of supernatural terror (Twilight Zone, 1983). 460 numbered copies printed.''the novel opens with Anthony Lovell, Sr., master of the ancient abbey of Kestrel and its like-named island off the Cornish coast, raving in madness and fear over the ancient family curse that ''dwells in the bowels of the abbey rock.'' What has caused his madness is unclear, but it is obviously link... View more info

Echo Of A Curse: A Novel.

20-page introduction and essay on Ryan by Dwayne Olson entitled Honor, Sadism And Dysfunction: The Dark, Demented World Of R. R. Ryan. Originally published in 1939, the author is credited with several of the most compelling and over-the-top novels in the horror genre. The only author with three entries on Karl Edward Wagner's list of the 39 best horror novels of all time, Ryan's work has been known to only a few devotees: this novel is a descent into madness, perversion, and the supernatural like no other, one of the most deeply disturbing works to ever appear in the genre. View more info